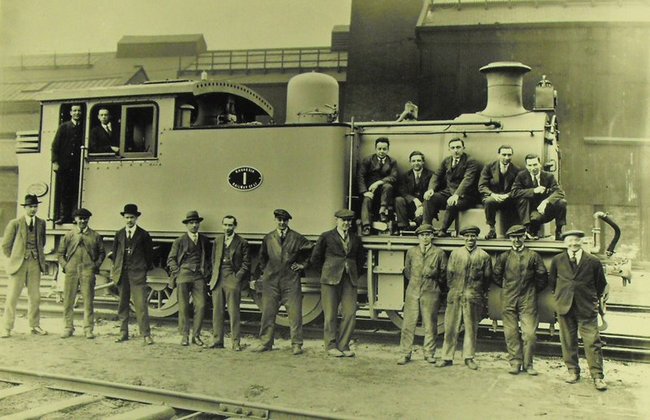 Above - Map of Hunslet in 1908. This map has been used elsewhere on this site to show how the works co-existed in Hunslet but note also the rows of back to back houses filling all the spaces between works. Some of these houses would later end up demolished as the Hunslet and Fowler works expanded.
Leeds still has large areas of back to back houses in use today, about 23,000 of them in fact.[4] These were ideal for densely populating areas close to the industry with the workers and their families. Often considered to be slums, the surviving back to backs are largely from those built in the later years of Queen Victoria's reign and beyond. Originally the houses would have had outside toilets in the gaps between blocks of houses that now form the bin yards. Generally the earlier examples of these houses had to share fewer toilets so have fewer bin yards today. These houses were still an improvement on the workers' houses that were around before them though. Often built without anything like the kind of planning and the number of regulations of later years. Landlords would naturally want as many rents coming in from a property as possible.
By 1918 70% of the population of Leeds lived in back to back houses.[4]

Display of Back to Back housing in Leeds City Museum (Photo Kris Ward)
With many houses often crammed in to little space there were a number of risks from the waste produced by the households. An example of a fire in Hunslet in 1864 highlights the hazards faced, some of the occupants affected would likely have worked in the local engine works.


Leeds fire engine on display at Harewood Traction Engine Rally in 2010. (Photo - Kris Ward) This engine would have been taken to the scene of a fire by horse and steam raised en-route to pump water. It is preserved at Armley Mills, it is not however a local product, coming from Merryweather at London.

SINGULAR FIRE AT HUNSLET: - On Friday morning week, it was discovered that a row of buildings in Accommodation-street, Hunslet, belonging to Mr.Taylor, were on fire. There are eighteen houses in the row, which is a new one, and it appears they are built on the refuse which for many years had been deposited from the glass works of Mr.Scott, which are in the immediate neighbourhood. The occupants of the houses have been in the habit of throwing their heated cinders into the back-yards; and the heat seems to have been communicated to the old refuse, as the floors and walls of the housed were found yesterday morning to be almost redhot. The Hunslet fire-engine was immediately sent for, and steps taken for removing the furniture from the houses. While engaged in this latter occupation, the neighbours observed that the doors and shutters of the fourth house in the row were closed; and an entrance having been affected, a man and his wife and their daughter were found lying in bed in a state of insensibility. They were at once conveyed to the open air and restoratives successfully applied. Four of the houses have been rendered altogether uninhabitable. The firemen were engaged playing upon the house until a late hour at night.[5]